What Is A Software Version Number?

Software version numbers indicate changes in a software product. As developers update and improve products, there are often several versions of the product available for end users. At the very least, developers will always create two versions of their software.

Not only do version numbers indicate that a product has been altered or improved on some level, they can also be used to communicate other important information.

In general, software version numbering indicates an order of release in some way. If you line up all versions of a product from the original to the most recently updated version, you will be able to tell the order in which they were released by looking at the version numbers.

In some cases, you can decipher the date on which an updated software was released by looking at its version numbers. This is helpful in understanding which software versions are the oldest and which are the newest.

>> Wondering whether to buy or build? Build vs. Buy Software: Pros, Cons & Six Questions to Consider before Taking the Plunge

Who Should Care About Software Versioning?

The two most important things to understand when reading version numbers are:

For consumers less acquainted with a product’s version numbers, it’s crucial to read the release notes of any software product before blindly updating software to the latest version.

Similarly, developers and teams charged with releasing upgraded versions of their software products should mindfully take the following into consideration when it comes to software versioning strategy:

Ideally, when thinking about how to version software, teams should choose a convention that facilitates best practice when it comes to improving software incrementally as well as communicates changes to customers. 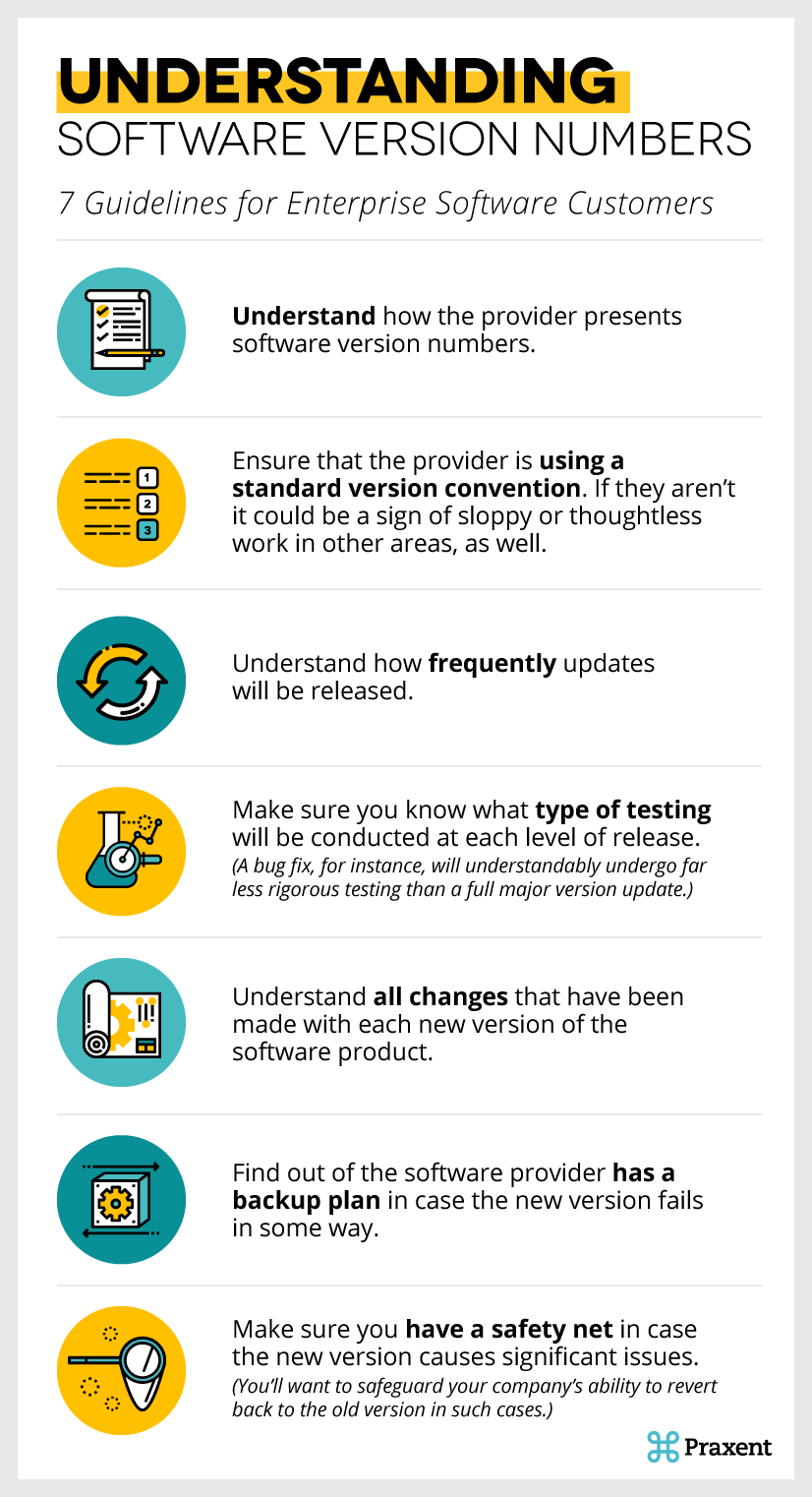 If you’re an enterprise software customer, you should keep the following guidelines about software version numbers in mind when working with IT partners or software providers.

>> Off-the-shelf software may be just what you need…or it may not. Here’s what to do when your inefficient software is costing you more than it’s worth.

Developers and businesses should use software version numbering to help their customers understand how their product has changed and what kind of support they can expect for older versions.

When thoughtlessly managed, software version numbering rules can be confusing for both users and developers. It’s important to ensure your team is adhering to release versioning best practices upfront. Under the semantic numbering convention (more on this below), the numbers work as follows:

For example, we are aware of a company that recently released version number 2.1.5.43 of their software product. They are using semantic numbering to keep track of their new releases. You can tell from the version number 2.1.5.43 that this company has not put much thought into which version number to change as they update their product. The development team appears to have a habit of just updating the least significant version number every time they make a change. After 43 updates, there have almost certainly been alterations to the product. Nonetheless, they are still incrementing the fourth number 43 versions later. Not only is this confusing for users who have almost no way of telling what each update has accomplished, it’s also bad for the company.

Good luck trying to get users to upgrade! This product has 43 different versions, each with an untold number of differences. Users will almost certainly be reluctant to risk changing their current version for something so ambiguous.

Even individual consumers encounter software version numbers on a regular basis. Thus, it’s important for companies to think through version numbering to effectively communicate information to their consumers. For users, it’s essential to pay attention to these numbers and understand what they mean for the software’s design and function.

Commonly, software version numbers will help you differentiate between major and minor changes using a semantic numbering convention. Take a look at what version you’re on and what version an update is. If the number representing major changes has been incremented, then understand that a lot of things will change once you go through with the update. If the number representing bug fixes has been incremented, then you risk very little change in the way you use the product.

It’s important to read the release notes to understand what the changes will be before implementing an upgrade. There are several common conventions for software version numbering, including:

One of the most effective software versioning conventions involves semantic numbering.

With semantic numbering, developers communicate the degree of change associated with each software update by categorizing versions into major, minor, and bug or patch updates. The patch number is incremented for changes that are not meant to alter the product’s existing functionality. Companies usually increment this software version number after fixing a bug that’s been introduced to the product.

The minor version number is incremented when developers add new features to the product that are still compatible with former versions in the same major category. For example, a 2.1.4 version will still be compatible with 2.2.0. If a software provider has released minor version updates, it’s likely they will still support users who do not upgrade because the updates are backward-compatible. With minor version updates, users will definitely see changes to the software’s functionality and features. But the change is less risky for users because it still runs along the same vein of compatibility as other minor versions in the same major category.

When developers make significant changes to a software product’s API, they will increment the major version number. This means that the changes are extreme, to the point that they render the software incompatible with older versions. At this point, the product has evolved drastically. It is no longer operating on the same vein as former versions. For example, while a 2.1.4 version would likely be compatible with a 2.2.1, it may not be compatible with a 3.0.0 or higher.

The only wrong software version number is the one that’s not following a convention. If you find yourself using software that doesn’t follow a versioning convention, you’ll want to be extra careful about making updates. This could also be a sign that it’s time to start looking for a different software or IT provider.

>>When it comes to enterprise software products, Praxent understands the importance of reducing risk and over-communicating. Contact one of our software maintenance experts today for a free consultation. 10 Signs of a Qualified Design & Development Partner: A Handy Checklist for Product Owners

Building a new digital product or updating an older one is a huge endeavor – only teams of seasoned experts can properly manage the job and be trusted to help you shoulder ownership of the outcome.

END_OF_DOCUMENT_TOKEN_TO_BE_REPLACED

We share the strategies you’ll need to modernize your online customer experience so you can outperform your competitor... END_OF_DOCUMENT_TOKEN_TO_BE_REPLACED