“Praxent … had a very organized approach that allowed me to take these sketches I’d done and turn them into a really beautiful-looking website. That allowed me to demonstrate—not only to prospective clients but also to my technical developers who were working on the back end—the product and what we were trying to achieve, what our vision was.

“It’s more than a guy with an idea if there are some tangible products I can show them. I haven’t sought to raise money, and I haven’t raised money off of it. But I think it’s opening doors in terms of just allowing me to get in the door with carriers so I can describe my idea to them because I have something more than just a plain deck that anyone can put together. I have a really professional-looking, finished work product.”

An insurance verification startup is able to go from idea to prototype and website, which it plans to use to gain carrier buy-in and purchase commitment before fully investing in product development.

A former commercial litigation attorney and expert in risk transfer in the construction industry, London consistently was hearing from insurance carriers that had sold policies to general contractors and were stuck footing the bill for claims they thought would be covered by subcontractors’ policies. Hiring attorneys to review the policies in advance wasn’t feasible, and the general contractors weren’t financially incentivized to solve the problem. So London set out to create a digital platform, powered by machine learning, that would enable carriers to automate the coverage review and verification processes for these subcontractors. By standardizing the risk transfer provisions of policyholders’ subcontracts and automating the enforcement of these provisions, insurance carriers can substantially reduce total loss, potentially saving them tens of millions of dollars per year.

London knew in order to get buy-in from these carriers, he would need to demonstrate he had more than just an idea; he had a proof of concept and a clear roadmap to development. Creating a prototype would help him move forward with validation, marketing, and development at the same time. He was impressed by Praxent’s organized, user-centered approach and decided to move forward with designing and developing a clickable prototype, which along with an app map, wireframes, and style guide, he was able to complete in just 8 weeks.

Now, London is able to move forward into development because his backend technical team not only has the frontend design but also a clear picture of his vision for the platform. He is also able to secure meetings and conduct demos with potential carriers thanks to the prototype.

When I came to Praxent, I had talked to a number of development shops. Basically, what I had was a series of sketches that I made on a tablet, laying out what I wanted, and the workflow of what I wanted the website to look like.

What I liked about Praxent was that they had a very organized approach that allowed me to take these sketches that I’d done and turn them into a really beautiful-looking website. That allowed me to demonstrate—not only to prospective clients but also my technical developers who were working on the back end—the product and what we were trying to achieve, what our vision was. And, and I think the Praxent folks did a really great job of walking us through that process.

Dan London conceived of an automated web-based platform to solve the lack of insurance coverage verification for construction trade subcontractors.

Subcontractor risk and an insufficient solution:

A better way was ideated: Use machine learning to verify coverage before subcontractors start work and then keep track of expiration and policy changes.

As an attorney with an idea for a digital product but without the technical expertise to execute on it, London needed a design and development partner with deep insurance industry expertise that could provide him with a go-to-market roadmap. He needed a proof of concept to get early feedback and, ideally, a sales commitment from carriers in his network. He needed a prototype that would help him demonstrate his web-based platform visually as well as interactively—not just paving the way for validation but also setting up a seamless development process.

Because we walked through this, we created this roadmap for what the product was going to do. It provided a really clear (I’m trying to think of a different word than) roadmap. It helps me to illustrate to the developers who I’ve hired to build the technology that actually looks at an insurance policy and compares it against a set of requirements. It helped me to provide that map for them so they understand where we need to wind up in advance—that was the most important step. What’s also important is that I’ve used the workflow that we’ve developed to create my marketing materials for insurance carriers as I go and look for capacity to produce the product. And rather than having to build a PowerPoint presentation deck from scratch, I’m able to use what we have. So that’s been helpful as well.

Praxent’s expert design team worked closely with Dan London, considering his goals for the platform and helping him to apply design thinking from the earliest stage. This led to conversations around the brand, including design and colors, but also the users and their unique needs, which led to new feature ideas that informed the creation of the prototype.

London particularly was impressed with Praxent’s project management and consistent delivery of what he asked for within the parameters he needed with respect to timelines and budgets.

Design Thinking Workshop as an initial facilitated session that enabled the designers to:

High-Fidelity Clickable Prototype to allow the client and his network to experience the key workflows as they would look on the finished web app worked over three different personas (insurance carrier, policyholder, and subcontractors)

We began with the design process of the ClickModel® Prototype by creating wireframes to focus on the user experience, once approved, the style guide was applied to create unified UI designs.

Several style tile iterations were shared with the client throughout the design process to help them decide on branding aesthetics.

I think the most important thing we did was develop the wireframe. We walked through the workflow, and we considered how the product would work and the perspective of each of the potential end users. And as we walked through that, we realized, ‘Oh, we need to link item A with item B. We didn’t think about that. We knew where we wanted to get to but we see there’s a little part of the road that hasn’t been paved.’ I thought that was a really helpful exercise in going through that Praxent was really good about being proactive and identifying those areas.

Praxent delivered a high-fidelity prototype and landing page that brought the client’s startup idea to life and enabled him to gain feedback and commitment before investing in development.

London says his developers have been able to use Praxent’s design files as a “roadmap” to guide their coding and build out the application on the backend.

The prototype also has enabled London to secure meetings with carriers and build out its marketing efforts. Finally, he is hoping to pursue his idea of someday integrating the platform with construction management systems.

What we have, which nobody else has, is this web-based platform that validates risk transfer and tracks compliance throughout the lifecycle of a construction job. And by holding constant, or standardizing, the risk transfer elements of the construction job, they will always have the same insurance buying requirements. [They will] always have the same indemnification requirement. And by keeping track of the progress of a job by inviting subcontractors to join our system, what we’re able to do is eliminate the biggest cost to carriers who write insurance for general contractors, and that’s the cost of an error in the contract.

By standardizing that process, we can get a lot closer to effectuate the intention of these subcontracts, [which is] to take the risk of liability for a construction site accident and move it from the general contractors and owners who aren’t on the site and don’t have control over the work to the subcontractors who employ the tradesmen, to actually control how they work. At the end of the day, that should make for a safer job site.

Praxent delivered a high-fidelity prototype and landing page that brought the client’s startup idea to life and enabled him to gain feedback and commitment before investing in development.

London says his developers have been able to use Praxent’s design files as a “roadmap” to guide their coding and build out the application on the backend.

The prototype also has enabled London to secure meetings with carriers and build out its marketing efforts. Finally, he is hoping to pursue his idea of someday integrating the platform with construction management systems.

Set insurance and indemnity requirements, which the policyholder distributes to their subcontractors

Get alerts when a subcontractor’s policy is about to expire or if there is a notice of a claim, reducing the risk of them having to pay for claims caused by the subcontractor

Automated reminders when their policy is close to expiring

Starting with the site map, Praxent designed a marketing site to represent the value proposition of the application. 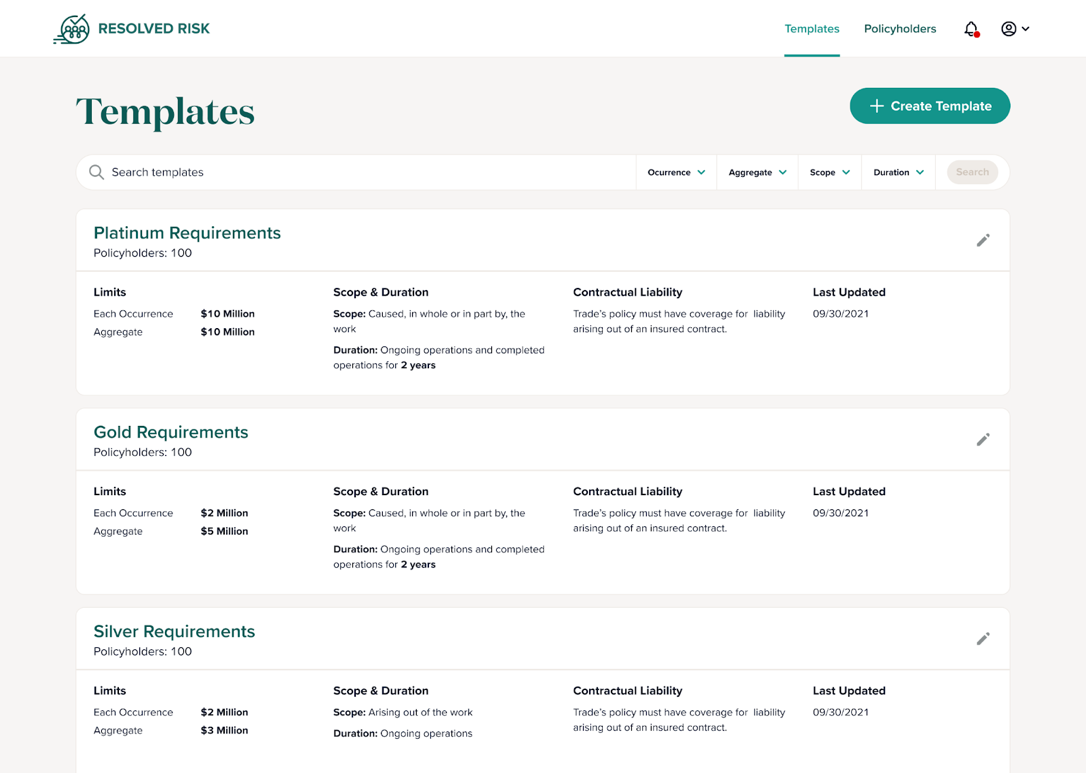 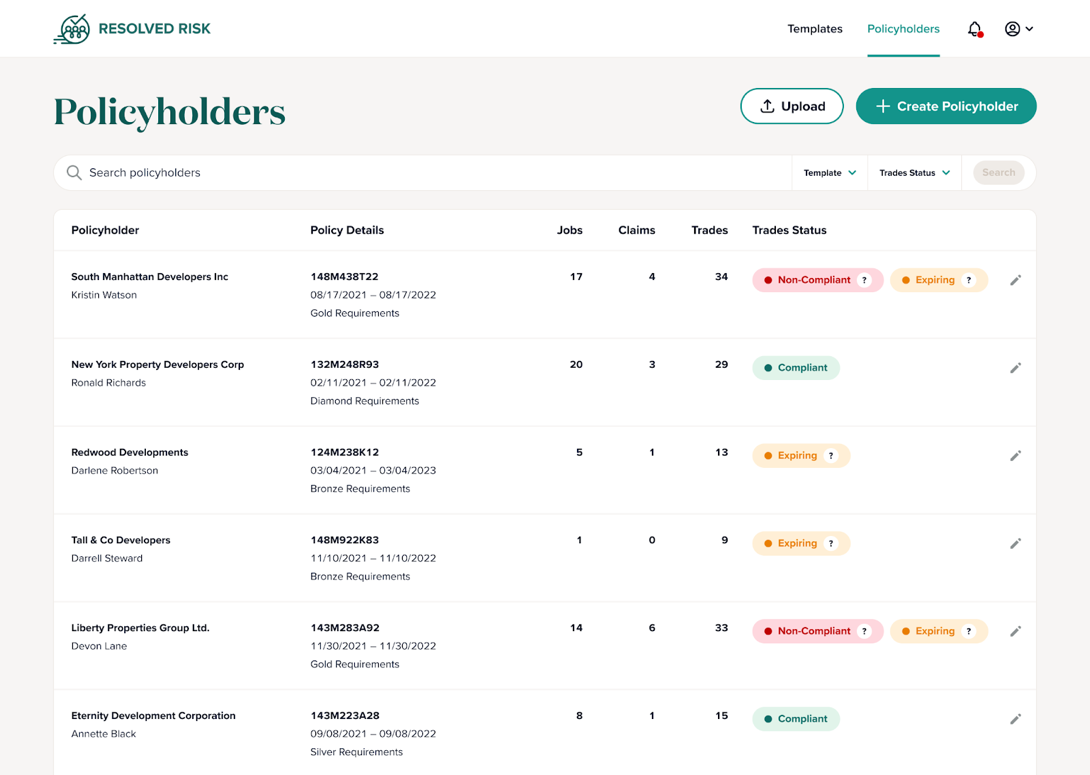 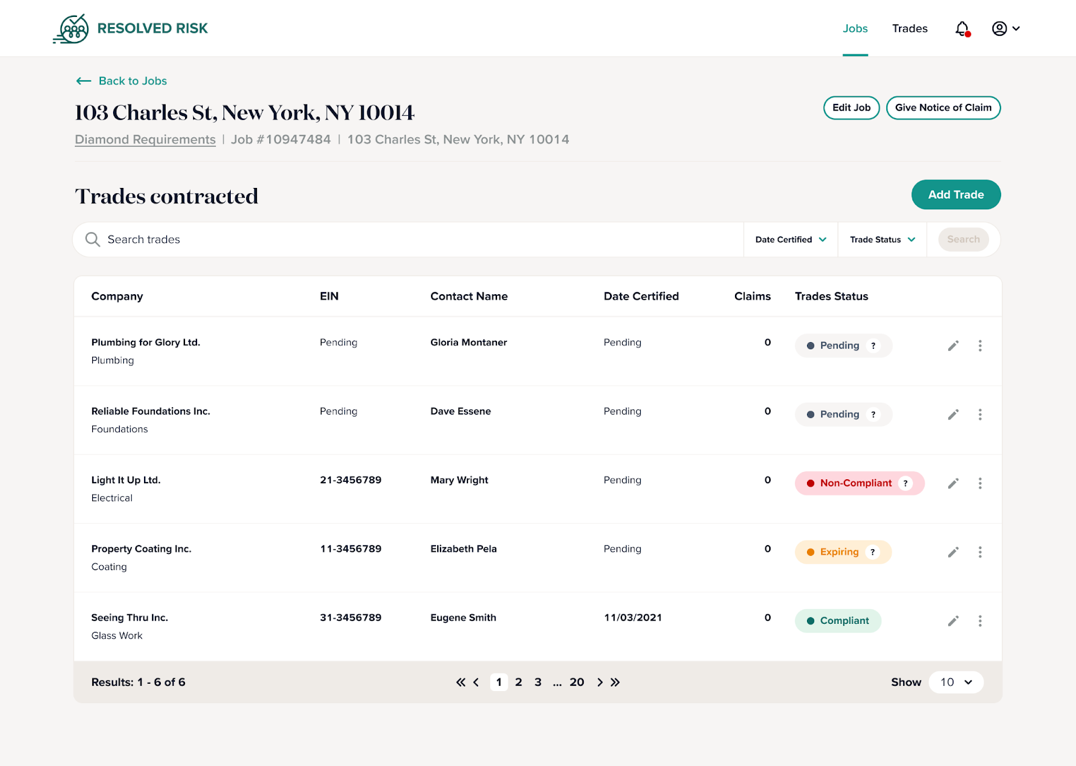 END_OF_DOCUMENT_TOKEN_TO_BE_REPLACED

We share the strategies you’ll need to modernize your online customer experience so you can outperform your competitor... END_OF_DOCUMENT_TOKEN_TO_BE_REPLACED